Tinea Capitis is a fungal infection that affects scalp and hair follicles. It is also known as ringworm infection as it causes ring shaped or circular itchy patches on the scalp initially which may become irregular on spreading. Tinea Capitis is seen more commonly seen in children; however some fungal species can affects adults too. It is highly contagious and can easily be spread from close contact with the infected person or on sharing things such as combs, towels, caps or other hygiene items. Experts also suggest that animals can be carriers of fungus causing Tinea Capitis. This article gives details on symptoms, causes, treatment, and prevention strategies to control Tinea Capitis. 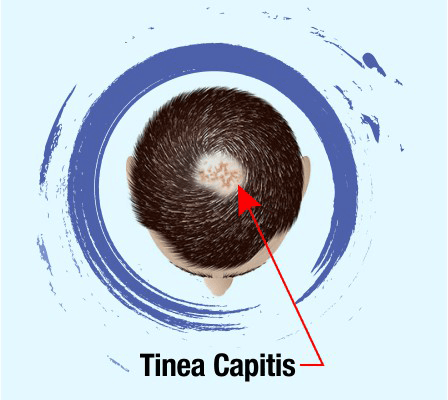 What is Tinea Capitis?

Tinea Capitis is a superficial fungal infection that mainly affects the scalp, hair shafts and follicles. It is caused by Dermatophytes a type fungi that commonly infect outer layer of skin and keratin rich parts such as the hair and nails. Usually the fungal infections do not show age disparity. However, Tinea Capitis is seen predominantly in children especially in the age group of 3 to 7 years and is more common in boys than girls. It also goes by the names such as ringworm of the scalp and tinea tonsurans. It is characterised by ring-shaped, scaly, red rashes that cause itching. In its milder form it causes scaling of scalp skin with little hair loss where as severe form of Tinesa Capitis can cause large plaques with extensive alopecia.

The fungal infections caused by dermatophytes ( known as dermatophytosis) show several distinct clinical features depending on the location and causative agents involved. The types of Tinea infections include, 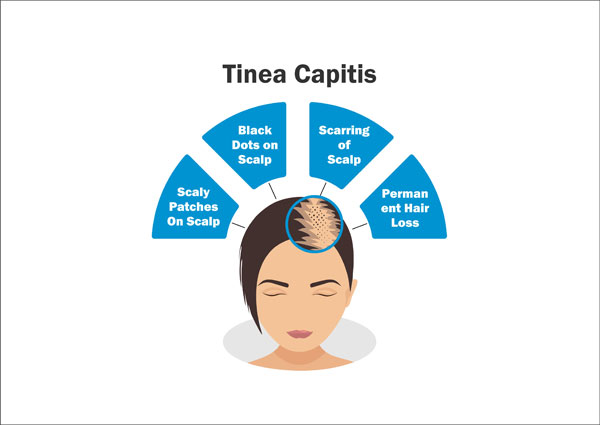 The fungi causing tinea infection grows from the skin towards the hair in the inner layer of skin and invades the keratin. It then spreads along the hair shaft as it grows. The affected hair becomes brittle and starts to break leaving a black dot on the scalp.

Tinea Capitis presents in three forms as given below

Ectothrix: This invasion affects the outermost part of hair shaft and the cuticle gets destroyed. This infection is caused by fungi species such as Microsporum canis, Microsporum gypseum, Trichophyton equinum, and Trichophyton verrucosum.

Endothrix: This type of hair invasion occurs within the hair shaft only. The outer cuticle of the hair remains intact. Endothrix is caused by agents such as Trichophyton tonsurans and Trichophyton violaceum.

Favus: This type of invasion is usually caused by Trichophyton schoenleinii, and results in scalp crusts and hair loss.

Fungal infection by dematophytes is the most common cause of Tinea Capitis. Since this infection is highly contagious it also can be caused by using hygiene related items from an infected person. In addition, the fungi thrive easily in warm and moist environment, and hence Tinea Capitis may also be caused due to poor hygiene. Tinea infection in adults is often more subtle because the sebum has protective effects that decrease the risk of infection. However in post-menopausal women Tinea Capitis may be caused due to hormonal imbalances that alter the protective effects of sebum.

Common Causes of Tinea Capitis Include,

How is Tinea Capitis Diagnosed?

The diagnosis of Tinea Capitis begins with examination of hair scalp for presence of a scaly lesions and hair loss, especially in children. The diagnosis is further confirmed by taking sample of skin scales and hairs from the affected areas and conducting laboratory studies.

The culture development is performed in the laboratory. It can take up to 6 weeks and can also confirm the fungal species that causes infection.

How is Tinea Capitis Treated?

Treatment options for Tinea Capitis include oral antifungal medication and medicated shampoos. The fungal infections may take upto one month to cure completely. You may need to visit trichologist after 4 to 5 weeks to see if the treatment is working.

The trichologist may recommend starting oral antifungal medication as soon as the Tinea Capitis infection is suspected. However, some trichologist may also wait for the laboratory results that reveal the exact fungal species and start treatment accordingly. Topical antifungal do not work for Tinea Capitis as they cannot penetrate inside the hair or skin. The effective oral antifungal medications for treatment of Tinea Capitis include griseofulvin and terbinafine hydrochloride. The treatment is given for about 4 to 8 weeks. Terbinafine is not given to children as there are no efficacy and safety studies done for this medication yet. Both griseofulvin and terbinafine hydrochloride can cause side effects such as diarrhoea and vomiting. Other antifungal treatments used include itraconazole and fluconazole.

Shampoos containing antifungal agents such ketoconazole or selenium sulphide can be used twice weekly, to help prevent fungal infection from spreading. It is also recommended to be used while you take antifungal medications to stop recurrence of infection.

How to Prevent Ringworm of the Scalp?

Since ringworm of the scalp is contagious you need to make sure to have good hygiene habits while around a person who is infected. To prevent relapse or further spread of an infection that is already present make sure to follow the treatment plan for Tinea Capitis infection.

Tinea Capitis can be often confused with other skin and hair conditions like dandruff, alopecia, dermatitis, eczema or psoriasis of the scalp due resemblance in some common symptoms.

Are There Any Concurrent Problems that Exist with Tinea Capitis?

Tinea Capitis infection can cause other concurrent problems such as bacterial infection, painful papules. It may also lead to inflammation and swelling of lymph nodes in the neck area.

What are the uncommon concurrent problems that occur with Tinea Capitis?

In rare cases the itchy papules may also spread to the face, neck and trunk area.

Are there any Misconceptions About Tinea Capitis?