What is Female Pattern Baldness?

Female pattern baldness is also known as androgenetic alopecia. It is an irreversible type of diffuse hair loss that begins with thinning of hair at the top of the frontal region. Female pattern baldness can cause anxiety and lot of emotional turmoil as hair is attached to an individual identity. For women, hair is a crowning glory and losing it at any point in life can be very disturbing.

It is identified as hair loss that starts at the crown and frontal scalp portion. The frontal hairline is retained unlike in male baldness.

Stage 1: Thinning starts on the top portion around the hair partition

Stage 3: The hair thinning progresses and results in visible portions of scalp 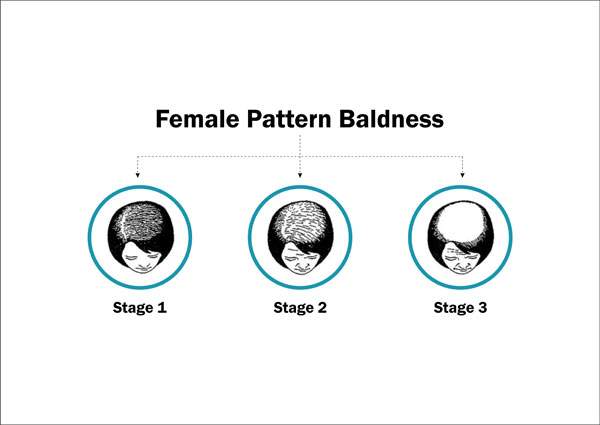 Can Genetics Cause Female Pattern Baldness?

Female pattern baldness can occur in females who are genetically pre-disposed to such loss of hair. Some women tend to carry genes that make hair follicles susceptible to destruction due male hormone DHT. The hair follicles get affected and it produces shorter or thinner hair. The anagen or growth phase is also reduced from normal 3 years to few weeks or months whereas the telogen or the falling phase increases. Resulting in lesser and lesser reversibility of the hair fall. Which in turn results into increased scalp visibility.

What Else Causes Female Pattern Baldness?

Female pattern baldness may my get triggered due to mental stress, poor nutrition, lack of sleep, certain medications, use of contraceptive drugs and any gynaecological ailments.

Can Women Get Female Pattern Baldness in Their 20s?

How is it Diagnosed?

An expert trichologist simply can diagnose female pattern baldness without any specific tests. However, to rule out any underlying pathology one may need to do some blood tests to analyse the levels of thyroid hormones, androgen, or vitamin & mineral deficiencies. Sometimes ultrasound of pelvic region may also be advised.

The initial stages of female pattern baldness may not require any camouflage. The thinning of hair can be hidden by changing the way of styling hair. In advanced stages doing hair transplant or wearing hair piece is a good option.

Minoxidil is known for its hair growth stimulating actions when applied topically. This medication is mainly prescribed to cure hair loss in people under the age of 40 years. Although minoxidil is used to stimulate hair growth the use of this medication does not cure baldness.

Hormones that block the effects of androgens are also often used to prevent the progression of hair loss in female pattern baldness. Some medication such as spironolactone, cyproterone, finasteride and flutamide work as anti-androgen agents and reduce the destructive effects of androgen on hair follicles. However, use of Finasteride in women in reproductive age should strictly be avoided.

In women natural treatment for baldness is preferred as hormone replacement therapy has side effects. Dong Quai Complex made from a plant called Dong Quai and Megafemme tablets which are made from Peruvian herb, both have natural estrogen and show effective results when hair thinning occurs due to low levels of estrogen.

Some foods such as Soy, Flaxseeds, Walnuts and Yam show oestrogenic properties and offer great support to baldness treatment.

Can You Prevent Female Pattern Baldness?

Female Pattern Baldness cannot be prevented when the underlying cause is genetic or hormonal imbalance. However, it can be controlled very well with the help of above mentioned phytoestrogens and correction of life style.

Should I have Any Hormone Tests Done?

An expert trichologist may ask you to do some blood test to find out the cause of hair loss. Since in women the female pattern baldness mainly occurs at stages that are influenced by hormonal changes, hormone tests may help in diagnosis of hair loss; but many times the fluctuations may not reflect in serum levels.

What are Good Hair Care Tips to Prevent Hair Loss?

A hair loss or female pattern baldness that happens due to biological changes in the body or caused by gene inheritance cannot be prevented. However, some good hair care tips and healthy lifestyle habits can help you to have healthy hair that are less prone to breakage and fall.