Male pattern baldness is also known as androgenetic alopecia. It begins with loss of hair from front side causing the receding of hairline. The hair thinning starts as the gap between two hair increases and eventually exposes the scalp. The hair on the temples and crown portion start to become baby-like or Vellus; as the baldness proceeds through its advanced stages it disappears. At the final stage of male pattern baldness just a band of hair is left on the back and on the sides of the head. The rest of the head looks completely bald.

What are the reasons for hair loss?

Who does it affect?

The susceptible men start losing their hair in late teens and early twenties. And, affected men start showing signs of baldness by the time they reach their 30s.

Visible Results And Effects
Anagain is a  perfect hair fall solution as it:

Hair is your crowning glory and your body’s barometer indicating good health or lack of it. Your hair is extremely sensitive to emotional, environmental and metabolic factors. Fashion and stress have become modern-day disorders, and it does affect our natural hair flow too. Thus, it is no exaggeration to state that hair loss, symbolised by hair fall and hair thinning has become a modern-day epidemic.

Before we dwell on the topic of hair fall solution, we need to be aware of facts such as reasons for hair loss. As for the hair loss treatment, we will introduce you to RichFeel’s Anagain – the world’s first hair fertility treatment. Read on to find more information on the Anagain Procedure, Anagain side-effects, and Anagain cost, Anagain reviews/testimonials. In short, find more about how to prevent hair loss with Anagain hair fall solution, only at RichFeel.

RichFeel Trichology of India teamed up with Mibelle Group of Switzerland and Biotec Labs of Italy to fight hair loss and present to you a breakthrough hair fall solution called Anagain.

Biotec Labs, on the other hand, is a reputed manufacturer and supplier of world- class diagnostics. Biotec is identified with producing advanced and sophisticated machine in the field of Asthetics. Besides, the company gave us an outstanding hair fall solution in the form of RF Anagain 10 X machine.

How the Anagain Technology Works

Building on breakthroughs in the field of organic, bio-active extracts in premier labs around the world, the scientists focused on the humble pea sprout as an ingredient capable of delivering the miracle. The phytonutrients were isolated and extracted, which in turn, had transformational effects on human hair.

The potency was increased by mixing the extracts in a solution of Phenoxyethanol Sodium Benzoate (and) Water to create Anagain, which activates the Dermal Papilla (a “ball” of specialised dermal cells) to induce hair growth by signalling molecules that initiate the growth of a new hair.

RootBioTec HO – an extract from basil, the king of herbs

Basil is a common name for the culinary herb Ocimum basilicum. The word comes from the Greek word basileus, which means “King”. Indeed, basil is considered to be the “King of Herbs” and plays an important role in both Italian and Asian cuisine. Basil contains high concentrations of essential oils and potent antioxidants with anti- ageing, anti-cancer, anti-viral and anti-microbial properties. Thanks to these valuable components, basil is also used for its medicinal properties in Ayurveda, the traditional medicinal system of India.

RootBioTec – a novel technique developed to produce cosmetic actives for the production of RootBioTec HO, Mibelle Biochemistry developed a novel sustainable technique to produce high amounts of valuable secondary metabolites of basil in bioreactors. This so-called ‘hairy roots’ technology is a type of plant tissue culture that is used to produce high quality, phytogenic compounds of pharmaceutical value under controlled conditions.

RootBioTec HO inhibits 5α reductase and stimulates hair follicles. 5 α reductase II is the key target enzyme in the inhibition of hair loss. It is present in hair follicle cells and catalyzes the reduction of testosterone into the more potent androgen dihydrotestosterone (DHT), which has two to three times greater androgenic receptors affinity. RootBioTec HO demonstrated a clear concentration-dependent inhibition of 5 α reductase II with an IC value of 2.62 mg/mL. Finasteride, which is an approved 5 α reductase inhibitor and synthetic drug for treating baldness in men, was used as a positive control.

Another study that was conducted involves human dermal papilla cells. These cells are located at the base of the hair follicle bulb and play an essential role in the control of hair growth. They are implicated in regulating the hair growth cycle and the production of hair fiber.

Dr Fred Zülli is the Managing Director of Mibelle Biochemistry Switzerland which develops and produces active ingredients for the personal care industry. He founded Mibelle Biochemistry 22 years ago and invented a large number of patent-protected actives based on different technologies.

Dr Fulvio Ferrari founded and manages Biotec Italia since 1993 and brought the company to a market recognition in over fifty countries worldwide thanks to cutting-edge innovation and patented technology that has set new trends. Dr Ferrari’s hunger for knowledge and pursuit of excellence led to a full-fledged Biotec Italia R&D centre devoted to continuous research in creating products that were both clinically proven to work and affordable. The first brand to be launched was BioskinLas which became a runaway success from the time it hit the market. The trust reposed in the brand by people paved the way to even more research and Biotec Italia ventured into skin care and later into medical equipment’s such as lasers and electronic devices for skin rejuvenation, slimming and skin disorders.

Tested On The Scientist Who Created It: Dr Ferrari

“This breakthrough was so outstanding in its potential that I felt compelled to volunteer myself as the first test subject. I wanted to be sure that the test parameters would be uncompromising in their exactitude.

To be honest, like in any research project, I was not sure what the effect would be. What happens in a test tube and what happens in a real-life situation can be quite different. Every day was suspense-filled.

Till I started to see my scalp disappear behind a richer, lusher crop of my own hair. Anagain’s Hair Fertility is truly life-changing. And the first life it changed was mine. I am proud to be a part of the team that discovered it. Let us make this world a better to live in.”

This modern age formula has so changed the world of hair science that it has already won an award – the advanced ingredient award for its components.

INSPIRED BY NATURE • CREATED BY SCIENCE

RichFeel’s AnagainTM has been tested on a wide range of men and the results have been confirmed through observation of the sequence of anagen and telogen phases:

Many men, who were spending sleepless nights over the state of their hair, can now rest easy knowing that RichFeel’s AnagainTM is firmly on their side, working to keep their hair healthy and rooted to their heads with its 3-fold effect:

These three effects of RichFeel’s AnagainTM control the imbalance between hair fall and the growth of new hair.

SOME JOURNEYS
THROUGH RICHFEEL

A struggling actor, Rahul, had a life-changing experience at RichFeel.
Freedom from baldness! A new lease of life!

A social worker, Manisha, had a fresh lease of life at RichFeel.
A wish turned to reality - hair she had always yearned for!

A young and upcoming artist, Tanvi, had a life-changing experience at RichFeel.
Freedom from hair woes! A new lease of life!

UNDERSTAND HOW THIS
TREATMENT WORKS

Hair Fertility works best when the process is followed in a precise and predetermined 3-step course of action. The Anagain Hair Fall Solution is divided into three steps:

Here are the details on each of them:

Helps remove toxins and preparing the scalp for transdermal penetration. 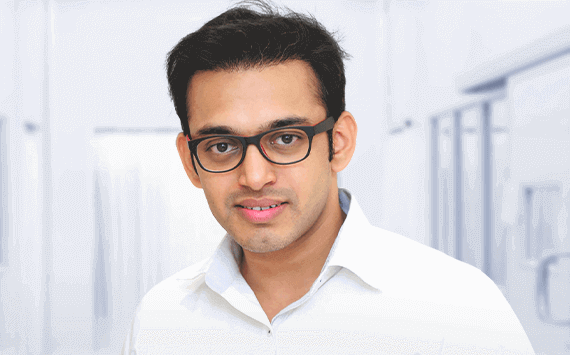 Hair transplant was a big decision for me. The rapid pace of hair loss was even more worrying. After several months of evaluation, I found the right solution with RichFeel. Dr. Shah’s immense experience in the field of trichology and the results of previous treatments have won my trust and today, when I look back, I feel that I’ve made the right decision. Trichologists at RichFeel are skilled and personally mentored by Dr. Shah. This, along with the art of hair transplant, is their secret. Expected results achieved, value for money. 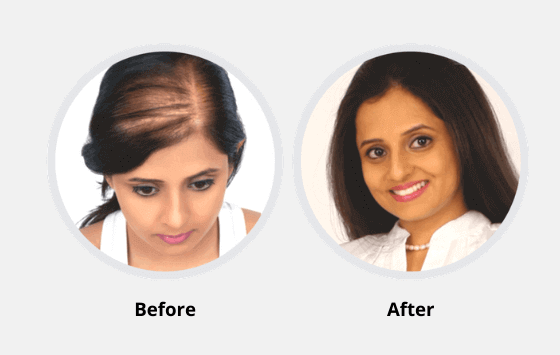 Hair loss is a difficult phase to counter in life and I had my share of it too, but I’m happy that I got over it. This was possible because of the latest FUE technology. The process was painless and left no scars. Better still, I got to see what I was expecting. The results were fairly good and left no confusion in my mind about my looks. I thank the staff at RichFeel ™, who gave me a complete understanding of the process and the results that I was expecting 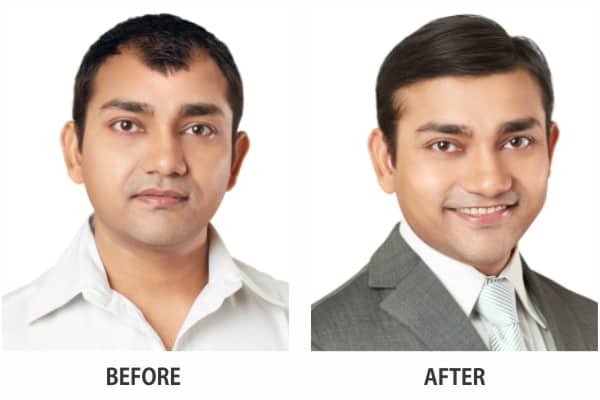 Baldness was a sinking feeling with each day passing by, till the time I discovered RichFeel ™. Happy to have fought hair loss. I owe a Big Thank You to RichFeel ™, for getting me the right fit of a system- that looks so real. The staff was very skillful with the measurements. With proper guidance, they helped me to manage my new found hair. The derma hold base is perfect and stays put for weeks together. Imagine people asking you what oil have you used to regrow your hair.

What is the cost of Anagain Treatment?

It is a cost-effective procedure which is going to provide you excellent results for hair loss. You can know the exact cost of the Anagain procedure by consulting a specialist at a RichFeel Clinic.

How will I know if I am susceptible to baldness?

Do watch out for the signs/symptoms indicated in this page. If you still unsure, do reach out to a Trichologist to help you with a clear diagnosis.

Where can I avail Anagain Treatment?

You can meet our Trichologist and start your Anagain Treatment at any of the RichFeel Trichology centers.

It is not an invasive treatment. The treatment uses Ultrasonic Sound Waves for exfoliation and detoxification, Low-Level Cold Beam Laser for stimulation and a non-invasive Transdermal Sonophoretic Penetration machine to rejuvenate the follicles.

How can you combat Hair Loss?

All you need to know about the most advanced solutions to tackle hair loss scientifically.