Alopecia totalis is characterised by complete loss of scalp hair. This condition affects only 1 out of 2000 people making it a relatively uncommon disease. Alopecia totalis is an advanced form of Alopecia areata, which is loss of hair in small patches. Alopecia totalis is a type of non-scarring alopecia where the hair loss occurs without complete destruction of hair follicle. The hair re-growth can be expected as the hair follicles are not totally destroyed as in scarring alopecia. The exact cause of the condition is not yet established but it is suspected that there are autoimmune and genetic basis underlying it. This disorder has no cure though sometimes hair re-growth occurs on its own.

What is Alopecia totalis?

Alopecia totalis is a disorder of the scalp that causes total loss of the scalp hair. In some cases the eyebrow and eyelash hair are affected too. This disease is an intermediary stage in between Alopecia areata and Alopecia universalis. Alopecia areata includes loss of small round patches of hair that create bald spots whereas Alopecia universalis characterises absolute loss of hair on scalp and body. Alopecia totalis is viewed to be an autoimmune condition where the immune system attacks the hair follicle causing inflammation. The hair follicle is however not destroyed unlike in Cicatricial Alopecia. Hence, there is some scope for re-growth of hair when the inflammation subsides. There is also some genetic basis to this disorder as there is familial disposition in the affected persons. Alopecia totalis usually progresses in two forms, either there is sudden loss of complete scalp hair or it begins as Alopecia areata. Alopecia areata is loss of hair in small round patches causing bald spots which eventually progresses to full scalp hair loss. A general notion states that this condition affects the old age group but on contrary to this, people of all age groups can be affected. This also includes children and adults especially individuals less than 40 years of age. This disease is also more prevalent in men as compared to women.

The symptoms of Alopecia totalis vary between individuals. The most evident symptom is Alopecia of the scalp that is excessive hair loss of the scalp. Very few people experience itching and discomfort like tightness on the scalp, while most others exhibit no symptoms at all. Sometimes there is sudden and rapid hair loss. Alopecia totalis usually starts with thinning of hair that eventually progresses to bald patches. Many a time affected persons also display nails that are brittle and pitted. Other than hair loss there is no physical secondary effect caused by Alopecia totalis. There may be however, a psychological strain and distress due to hair loss.

The definite cause of Alopecia totalis is not known, however genetics and autoimmunity have a certain role in the etiology of condition. The immune system is the primary defence system of the body that protects the body and fights diseases. In some cases, however, it falsely attacks the body’s own healthy cells causing autoimmunity. In Alopecia totalis the immune system releases cytokines (chemical messenger molecules) which attack the hair follicles causing inflammation and hair loss. About 20% of the affected individuals show familial disposition. Recent research says that people with certain specific genes are more likely to develop the disease. Also, long term stress is believed to affect the immune system though there is very little scientific evidence to support this.

The primary cause of Alopecia totalis is not clear but there are several risk factors that can lead to development of the disease. Some people are at a higher risk as compared to others due to genetic influence and a history of familial cases. Although any age group can be affected, this disease is observed in children and persons less than 40 years of age. Excessive stress for long term is also considered to be a risk factor.

How is Alopecia totalis diagnosed?

Alopecia totalis is diagnosed after a careful examination of the head and scalp. The examination gives an understanding of the hair loss pattern. Also, a complete medical history of the patient is studied by the trichologists. In some cases a biopsy of the scalp is done and the sample is investigated. The trichologist may also test blood sample to determine autoimmune causes to the disorder.

How to treat Alopecia totalis?

There is no such treatment that promises a permanent cure for Alopecia totalis. The available treatments help in suppressing symptoms. These treatments are of little or no help when it comes to hair re-growth. Nonetheless, there are therapies like immunotherapy, steroid therapy, medications like minoxidil that promotes hair growth, and ultraviolet therapy. These therapies often have serious side effects. Thus, those patients, who want to opt for a more natural course of treatment, choose to use essential oils. Some cases have also shown good results with the treatment of hydroxychloroquine. Also, a nutritious diet helps to prevent Alopecia. Some individuals often opt to wear a wig. Alopecia totalis has an erratic progression, is not much responsive to therapy and may relapse in affected individuals.

The course of Alopecia totalis cannot be predicted. It may cause several episodes of relapse in affected individuals after they have re-grown their hair to an extent. Complications of Alopecia totalis arise if it is not diagnosed or controlled in time. Alopecia totalis may advance to Alopecia universalis, wherein the patient starts losing hair from other parts of the body like armpit, beard or pubic area.

What is the Prognosis of Alopecia totalis?

The prognosis of Alopecia totalis is highly uncertain. In affected individuals who have recovered, the disease may or may not return. Since it’s difficult to treat, spontaneous re-growth of hair is seldom and there is a high possibility that it will relapse. Early detection and treatment provide a hope for an affirmative recovery.

Recovery rate
The recovery rate for Alopecia totalis is very low. The usual period of the disease is two years and there is a very low possibility of reversal of hair growth in such affected individuals. Since there is no cure and the treatments are also not useful, there is very little chance of full recovery. But in acute cases recovery is seen particularly in children. 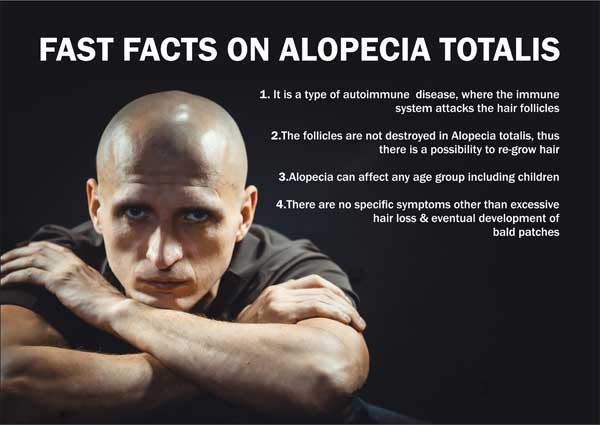